Mendel Majer Sztejnberg, a young Jew from Kaluszyn in Poland, travelled to the West alone. He settled in Brussels in 1920. He worked as a cobbler in shoe repair shops all over the capital. 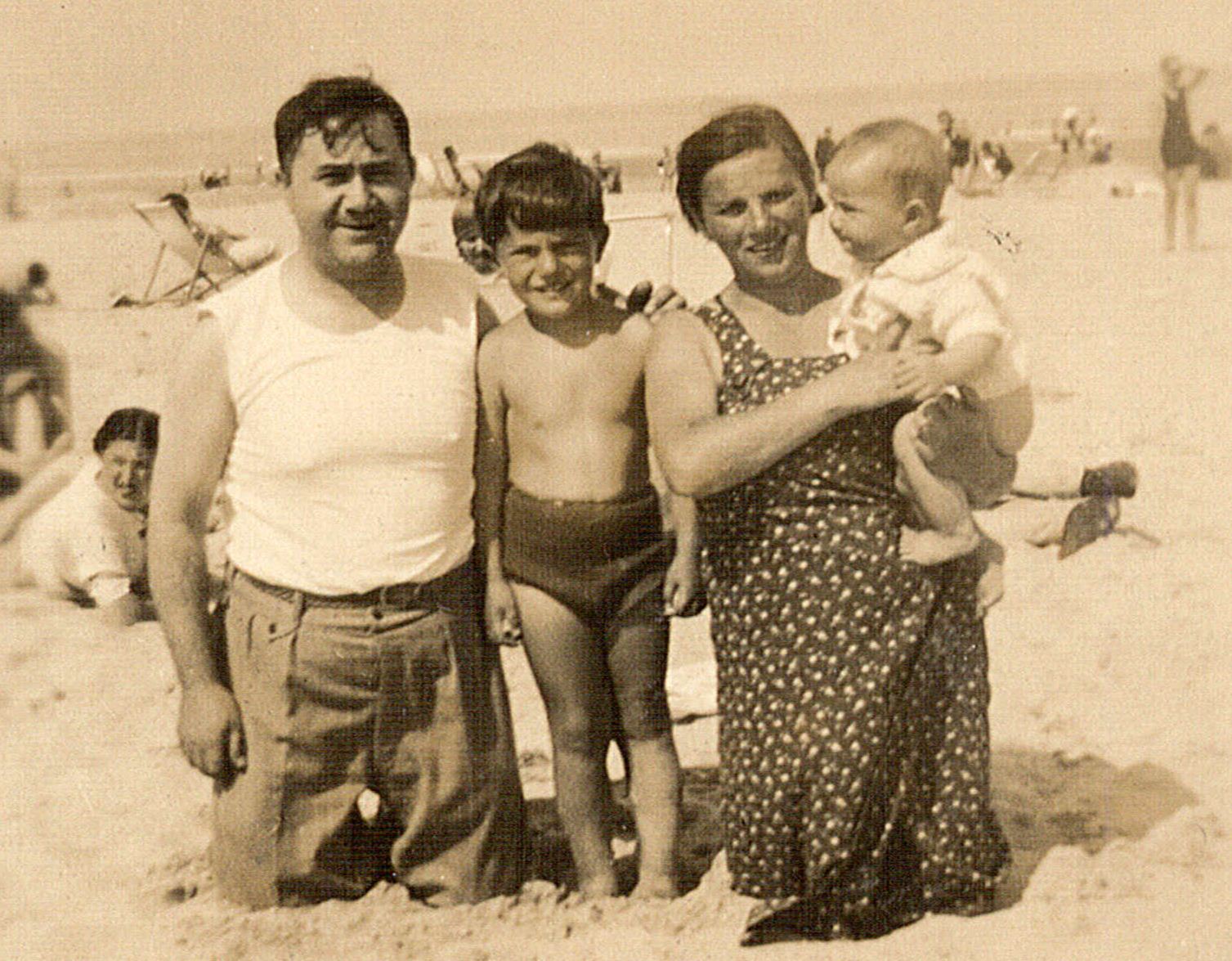 The Sztejnberg-Helman family, on the beach, summer 1937: the father, Mendel Majer, his eldest son Kolka, his wife, Ruchla Helman, Maxime, the last-born, in his mother’s arms
Mendel Majer Sztejnberg, a young Jew from Kaluszyn in Poland, travelled to the West alone. He settled in Brussels in 1920. He worked as a cobbler in shoe repair shops all over the capital. In the early thirties, he was able to open his own shop on Rue des Foulons. Ruchla Helman, who also came from Kaluszyn, joined him in 1930. Their first child, Kolka was born in 1933, and the second, Maxime, in 1936. The Spanish Civil War, which began in July 1936, had special significance for cobblers in Brussels. Several cobblers were Spanish emigrants and they mobilised their colleagues on behalf of the Frente popular. One of them, Markus Boldu, was involved in placing republican children with Belgian families.
During the summer of 1942, when Ruchla Helman and Mendel Sztejnberg were preparing to go underground, Markus Boldu gave them the address of Fernand Pironon and Marie Léontine Le Goff in Annonsart-Ohain, a village in Walloon Brabant. Kolka and Maxime were taken in there under the name of Van Steenberghe and stayed with the couple until the end of summer 1945. Ruchla Helman and Mendel Sztejnberg, sure of the safety of their children, hid in Boitsfort, a borough of Brussels. They were betrayed, arrested and taken to the Dossin Barracks on 17 September 1942. Their names were put down for Transport 11, which left on 26 September. Ruchla (41) disappears from the record after the transport’s arrival at Auschwitz-Birkenau on the 28th. This was the deadliest of all transports for women, with 94% being executed upon arrival.
Mendel, 40, was selected for forced labour. His registration number 66.164 was tattooed on his left forearm. Interned at Birkenau, he was posted to the Jawisowitz Kommando, a coal mine. In January 1945 he was part of the Death March to Buchenwald. In April he was evacuated to the Theresienstadt ghetto where the American army liberated him just in time. After recovering from typhus he returned on 11 June 1945.
Publication info

Register
Quicklinks
© Kazerne Dossin 2020
This website uses cookies to provide you with an optimal visitor experience and to measure your surfing behaviour. By clicking on "OK" or by continuing to use this website, you agree to this.
Ok More information